Sharp increase in seismicity since 2008 induced by massive wastewater injection

Unconventional oil and gas production provides a rapidly growing energy source; however, high-production states in the United States, such as Oklahoma, face sharply rising numbers of earthquakes. Subsurface pressure data required to unequivocally link earthquakes to wastewater injection are rarely accessible. Here we use seismicity and hydrogeological models to show that fluid migration from high-rate disposal wells in Oklahoma is potentially responsible for the largest swarm. Earthquake hypocenters occur within disposal formations and upper basement, between 2- and 5-kilometer depth. The modeled fluid pressure perturbation propagates throughout the same depth range and tracks earthquakes to distances of 35 kilometers, with a triggering threshold of ~0.07 megapascals. Although thousands of disposal wells operate aseismically, four of the highest-rate wells are capable of inducing 20% of 2008 to 2013 central U.S. seismicity.

The number of earthquakes is increasing in regions with active unconventional oil and gas wells, where water pumped at high pressure breaks open rock containing natural gas, leaving behind wastewater in need of disposing. Keranen et. al. show that the steep rise in the number of earthquakes in Oklahoma, USA is likely caused by fluid migration from wastewater disposal wells. Twenty percent of the earthquakes in the central United States could be attributed to just four of the wells. Injected fluids in high-volume wells triggered earthquakes over 30 kilometers [almost 18.6 miles] away.

This article is published with open access at Springerlink.com

Natural gas is composed largely of methane, and 3.6% to 7.9% of the methane from shale-gas production escapes to the atmosphere in venting and leaks over the lifetime of a well. These methane emissions are at least 30% more than and perhaps more than twice as great as those from conventional gas. The higher emissions from shale gas occur at the time wells are hydraulically fractured—as methane escapes from flow-back return fluids—and during drill out following the fracturing. 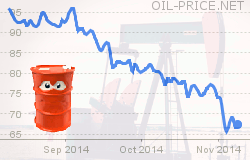 Recent falls in oil prices alter the financial dynamics of oil extraction. Certain sources of oil entail lower costs than others. For example, conventional pumped oil extraction in high pressure onshore wells costs relatively little to set up and operate, whereas remote oil fields beneath icy seas require specialized equipment and override wages to locate and extract. When the oil price rises, more difficult oil fields become economically viable, when the price falls, the margins of extraction remove the viability of certain sources. Hydraulic fracturing in the United States has provided an unexpected source of oil. However, it has contributed to an oversupply that could soon cause fracking production to shut down; as a matter of fact applications for new U.S. well permits dropped by nearly half last month. US oil production is slowing down because of low oil prices and today we’ll explain the reasons for that decline and explore the solutions.

Published on
Monday, December 01, 2014
by Common Dreams
‘The fracking industry needs to be urgently reined in before it’s too late for our planet and people across the globe.’
by Deirdre Fulton, staff writer
Multinational oil and gas companies are moving into increasingly vulnerable countries in Latin America, Africa, and Asia where the ecosystems, communities, and authorities are even less able to cope with the impacts of fracking and shale gas extraction, according to a new report from Friends of the Earth Europe.The report, Fracking Frenzy: How the Fracking Industry is Threatening the Planet (pdf), shows how the pursuit of fracking in countries such as Mexico, China, Argentina, and South Africa is likely to exacerbate the climate, environment, social, and human rights problems those countries already face. While much has been written about fracking in the United States and the European Union, this study “seeks to provide a global overview of shale gas development in the rest of the world,” its authors note, focusing specifically on 11 countries that are leaders in shale development on their respective continents.”From Brazil and Mexico to Algeria and South Africa, this thirsty industry is exploiting weak regulation and causing untold environmental and social damage in the pursuit of profit,” said Antoine Simon, shale gas campaigner at Friends of the Earth Europe. “The fracking industry needs to be urgently reined in before it’s too late for our planet and people across the globe.”Released as United Nations climate talks open in Peru, the report illustrates the variety of dangers posed by the rapidly expanding fracking industry. In Northwest Africa and Mexico, for example, longstanding water scarcity issues will only be exacerbated by fracking operations that require millions of liters of water per project. In the earthquake-prone Sichuan basin in China, the Karoo basin in South Africa, the Himalayas, or the Sumatran basin in Indonesia, drilling around complex underground geologies raises the prospect of increased seismic activity, higher costs, and “incalculable environmental impacts and risks.” In Argentina, Brazil, Russia, and South Africa, drilling activity on or near indigenous lands is already leading to conflicts with local communities.”The emerging planned expansion of the shale gas industry outside the EU and North America raises serious concerns because of the almost unavoidable environmental, social, and health impacts already seen at existing fracking sites,” reads the report. “Given that these problems have proved difficult to avoid in countries with relatively strong regulations to protect the environment, how can this industry be properly monitored in countries where environmental standards are often lower (and sometimes non-existent), and/or where enforcement capacities are frequently limited and where corruption can be an everyday reality?”Far greater scrutiny of the industry’s climate impacts is warranted, the report concludes, “particularly in countries which are already and will be much more directly affected by the consequences of climate change.”Natural gas “is not—and never has been—the clean fuel that the industry has tried to claim,” it reads. “In fact it poses an immediate threat to attempts made to fight climate change.”Friends of the Earth is urging the 195 nations gathered in Peru this week to consider these assertions.”Around the world people and communities are already paying the price of the climate crisis with their livelihoods and lives,” said Susann Scherbarth, climate justice and energy campaigner at Friends of the Earth Europe. “Fracking will only make things worse and has no place in a clean energy future. Europe and other industrialized countries most responsible for the climate crisis need to use the talks in Lima to make genuine commitments to end their reliance on corporate-controlled fossil fuels and embrace clean, citizen energy.”

From Food and Water Watch

Fracking for oil and natural gas is too dangerous: it threatens the water we drink, the air we breathe, and our health. It also accelerates climate change. That’s why we need to ban fracking now.

Fracking, also called “hydraulic fracturing,” is a destructive process that corporations like Halliburton, BP and ExxonMobil use to extract natural gas and oil from rock that lies deep underground. They drill a deep well and inject millions of gallons of toxic fracking fluid – a mix of water, sand and harsh chemicals – at a high enough pressure to fracture the rock and release the oil or gas.Fracking is exempt from major environmental laws, including the Safe Drinking Water Act, and spills and accidents are far too common.

Perceived and Real Problems of ‘Fracking’

I’ve been inspired by the movie ‘Unearthed’ (http://www.un-earthed.com/), a South African documentary on the pros and cons of ‘Fracking’ in the arid Karoo, South Africa. Like most such documentaries it does take a somewhat emotional approach, but unlike most, it generally has the facts right, and mostly avoids unfounded assertions (and I’m a picky, hard-to-please, under-stated European, so read that as a compliment). In particular, it highlights some common misconceptions.Now, what I feel like doing is highlighting, briefly (one could write a book at this stage),

As a result of recent technological innovations improving the ability to extract oil and natural gas from shale and other rock formations, the popularity of hydraulic fracturing, or fracking, has surged, leading to new investment opportunities and positive growth for the domestic gas and oil production industry. With the expansion, however, has come risk and scrutiny.[1]

To help quantify and qualify those potential risks, and in response to escalating public concern, Congress directed the U.S. Environmental Protection Agency (“EPA”) to conduct a study into the potential impacts of fracking on drinking and ground water. A first report of results is expected by the end of 2012, with a final report to be released in 2014.

Waste not: Common Sense Ways To Reduce Methane Pollution from the Oil and Natural Gas Industry

The case for taking action on climate change has never been clearer: as the third National Climate Assessment states, the U.S. is already experiencing the effects of climate change, from increasing heat across the country to more extreme weather events totaling billions of dollars in damage. Given these impacts, and much worse to come, the cost of inaction to our health, environment, and economy is far too great, especially when effective and low-cost means for reducing climate-warming pollution are available now.

In this report, we show how the U.S. Environmental Protection Agency (EPA) can fulfill the agency’s duty under the Clean Air Act to cut in half dangerous, wasteful methane pollution from the largest industrial source—the oil and gas industry—in just a few years, using common sense standards based on available, low-cost control measures for a targeted

The oil and gas industry is the nation’s largest industrial source of methane, a much more potent climate-warming pollutant than carbon dioxide pound-for-pound, and the oil and gas sector is the second largest industrial contributor to overall climate pollution. Moreover, there is compelling evidence that the industry is releasing a lot more methane than is currently accounted for in government inventories. For the full report http://catf.us/resources/publications/files/WasteNot_Summary.pdf

Donations are critical to continue the fight against MVP, fracked gas pipelines, and the use of eminent domain for capital gain. Your tax deductible donations can be put to work in many ways. For attorney and legal fees. For research and studies to counter MVP claims. For public awareness materials.

Donations in any amount are greatly appreciated.